Everyday people work to make Kitchener and its communities, our region, our province and our country better. Every day I am humbled and inspired by the enthusiasm and support of so many great people... a few of the comments are included here.

I hope you will  contact me and discuss what you care about and how you see Kitchener Council could help. 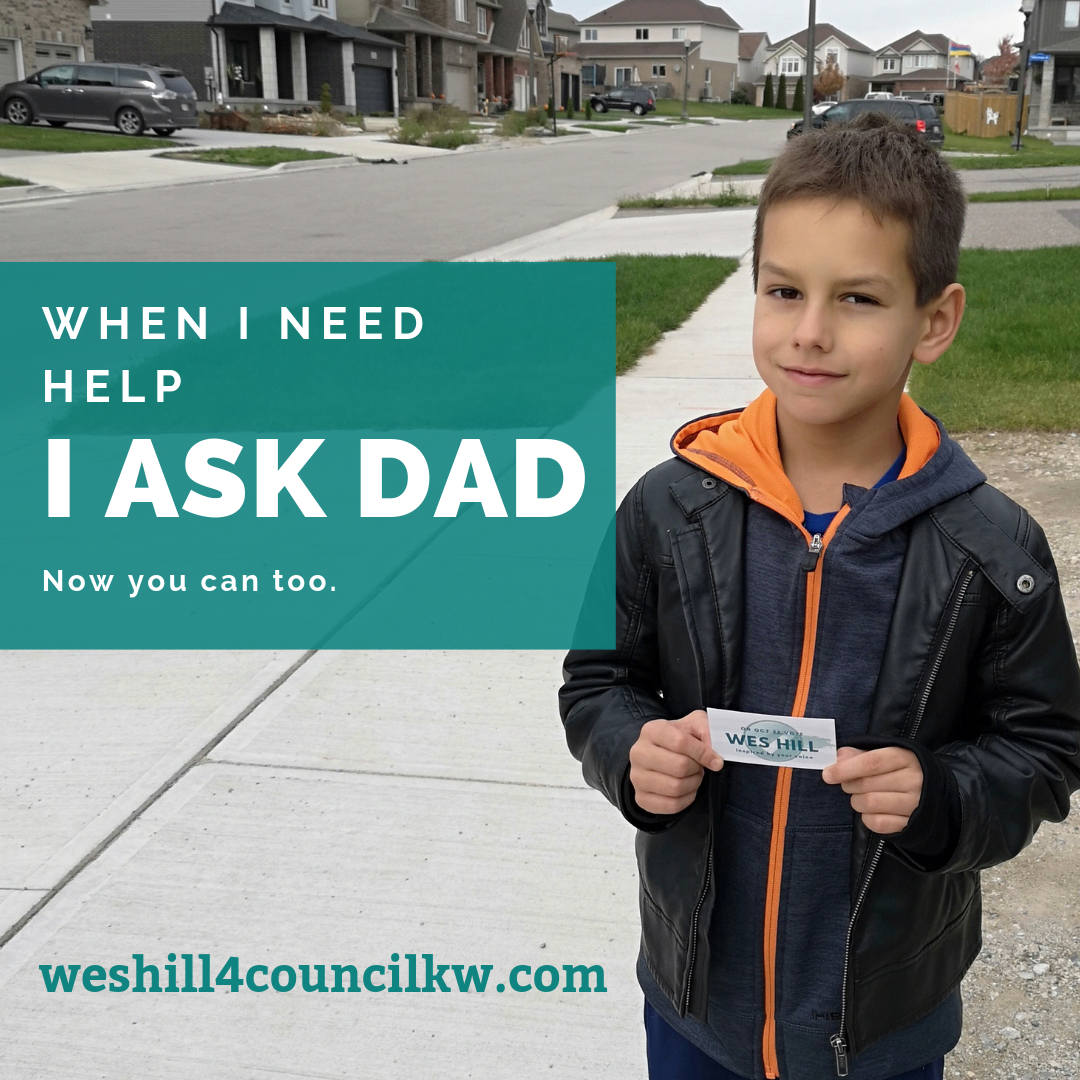 On Wes Hill being the voice of Ward 4

• “I would like to go on record as endorsing Wes Hill for city councillor for Ward 4 as I can think of no better candidate than him, and I am certain that the people of Ward 4 will discover this as well. Municipal politics is not the politics of Empire and Nations, it is the politics of community and families and when choosing the person to speak for you, you want that person to be someone who will represent your wishes. City councilor is not about applying your vision it is about giving the families within a voice. I have known Wes for over 16 years now and time and time again he has impressed me with the strength of his character, his ability to listen and understand and his skill at turning intent into action. We sometimes dismiss municipal politics as “too small to warrant notice”, because not many of us can remember the last time we voted in a municipal election. I can’t. Since following Wes on his journey towards the council seat of Ward 4. I can tell you that it IS important and these choices do MATTER. These are the politics of community, of parks and paths and all the little things that we never notice on their own, but stacked up together they mean everything. Ward 4 could not pick a better person for the seat, and I am excited to see what he can accomplish, and look forward to the future of Kitchener and Ward 4."

• “Wes Hill cares about his neighbourhood and the broader community. As a small business person he is in constant communication with many of the people who live in his ward. He is aware of the little things, and the bigger issues too, that are important to the people who live in Ward 4. The environment, parking, traffic, trails and parks, housing and the pressures of growth are all important issues that Wes cares about.  Wes listens well.  He is also prepared to try something new if it appears to hold the answer to a need or a problem. Wes Hill is ready to make a contribution to his community as councillor in Ward 4.

• "Wes is exactly the type of person who should, but typically doesn't, run for a political office. He is a dedicated, caring, sincere, intelligent, business-savvy, and ethical person. He approaches every endeavour, both business and personal, with the type of passion that would make him a fantastic representative for his Ward on City Council. As a successful, grassroots business owner, he understands the local economy. As a local resident, he understands the issue that his city and neighbourhood face. My only regret with his campaign is that I do not live in his Ward and cannot support him at the polls. He is a natural fit in this role, and is exactly the type of person that Kitchener needs in Council!.

• "Great choice for this position!"

I have known Wes Hill for several years and am pleased that he has decided to step up to run for Council to represent Ward 4. I have always been impressed by his enthusiasm and energy in his personal and business life and by the creativity and commitment he brings to any projects he undertakes. When he told me he was running for Council, I asked to meet with him, before giving my support, to discuss some of the local issues which I and my neighbours have been concerned about for some time. Among these are the impact of rapid residential development on the unique heritage villages of Upper and Lower Doon, increased traffic through Homer. Watson Park and the Agreement Forest which includes safety issues for the large number of pedestrians and bike riders using this narrow, shoulder-less section of Mill Park Dr., and changes in demographics, rental availability and parking caused by the growing student population at Conestoga College. Also of concern is a sense of a lack of meaningful consultation with residents over zoning, one example of which is the approvals for the building of large modern “executive” homes in the heart of Upper Doon Village which we thought was a protected heritage site. Added to this is a sense that developers seem to have the upper hand in the process. When we met, what most impressed me was that Wes had taken considerable time and effort to make contact with all the relevant agencies and administration personnel, municipal, regional, and provincial to find out the facts and to carefully consider his response to each of these matters. This tells me that he will be an active and responsive representative for the residents of our ward. We talked for nearly three hours not only about these ward specific issues but also about his further ideas to improve life in the city and region generally. He drew on the knowledge he has gained from his experience in the property management industry which has given him a thorough grasp of housing, rental, and zoning issues. As well, he has researched widely looking for ideas from other jurisdictions and countries to improve life in the region in areas such as traffic management. The discussion was frank and his answers were thoughtful. His outgoing personality also made it enjoyable. In the end, while I didn’t necessarily agree with him on every point, I came away believing that Wes will be an involved, creative, committed council member who works hard for, listens to, and is responsible to, his constituents. We talked for nearly three hours

Wes is the kind of compassion Kitchener needs. He’s a family man, with his roots firmly implanted in Kitchener. Honest, passionate, intelligent, personable and extremely hardworking. Wes is the kind of inspiration this city is looking for. He’s a savvy business owner that knows and cares about what kitchener is looking for, and needs. When he mentioned his running, I was a surprised, and excited for Him. Wes, just like you, is tired of how things are going, and wants to breathe a breath of fresh air into the political views of the area. This is much needed, and I welcome this with open arms. Wes has my support. He is the definition of what Kitchener stands for.

As a long time patron of Wes's Gastropub, it is with mixed feelings, that I endorse Wes Hill for Ward 4 City Council. Heavy heart because Wes Hill elected to city council means I and many others will likely have to wait a just a little longer for the next iteration of the Laughing Demon. I'm far from alone in that feeling, at the goodbye evening at the restaurant I asked others where they might start going instead -- none could name as single place with similar dynamics.

Wes provided a space that was ‘Cheers’ like in that is was that space where everyone came to know you name. Wes has a gift for bringing people with disparate personalities together. I’m not from Ward 4 — but I’ve come to know many people from the area because of Wes. My wife is actively lobbying for us to move into the area because of Wes’s passion about Kitchener southwest, and all things Kitchener. Because I’m not from the area, I never cared much one way or the other about Kitchener. But Wes & Jess drew us back every week for the last three years or so. We’ve made new friends, found unique places to explore and events to attend — all because of Wes’s ability to bring people together by drawing out what matters to them and pairing those with what matters to other patrons, or things happening — charities or events in the region for example. As he has a gift for pairing foods and making the most of local and regional ingredients, craft beers and wines for people — he has that same ability to pair people and their interests.

I know this is a strange endorsement. But, in losing our weekly destination, my wife and I have a lost our best destination for community experiences. If you think about it, that says a lot about what Wes can bring to city council, and who he can be to the community and do for the community. Wes Hill is the council candidate to vote for in Ward 4.

Wes gets it. He understands the challenges of getting local representation right. He’ll never fail to listen, advocate, consult, and include constituents in the complex task of consensus building with a council of 10 elected to safeguard and empower the greater good. Innovative, articulate, and completely dedicated to Ward 4, Kitchener & Waterloo Region— he will serve tirelessly. I recommend voting Wes Hill on October 22. I wish we could have him for Guelph -- we could use him.